First, our great Docks and Grounds team has completed all of C dock. Their skills and teamwork are something to see. In addition, we had a terrific turnout for work day on October 29th. The LCYC grounds are looking good for our big Wurstfest event.

Second, our outstanding board of governors and all of our committee chairs have really been good stewards of our money. We were able to keep the fee increase incredibly low going into next year.

Third good news, we are going to have our annual meeting at our clubhouse this year. We will be providing information on this in our weekly blasts. Stay tuned.

See you on the water!

The 2023 LCYC Membership Directory will go to print in early January. Please check your current information to make sure there are no changes/corrections. If you should need to submit additional information, please use the fillable PDF form located on the Info/Membership page of the LCYC website or click HERE. The complete form should be emailed to Directory@lcyc.net

Formatting changes to the 2023 Directory

The membership roster will no longer list the formal names of members. Where nicknames are included in the current listing, that name will be used for the 2023 listing. The member number index will continue to list the member’s formal name.

The LCYC Fleet Roster will only list those boats that are berthed, stored and/or used at Canyon Lake. We will continue to list all boats under individual member names.

One copy of the membership directory is provided to each member account. Additional copies will be charged $10.00 plus $3.00 postage. This amount will be billed to your monthly statement. The deadline for ordering additional directories is December 15th. Click HERE to complete an online order form.

All questions/clarifications should be addressed to Kathy Leubner, Directory Editor.

Wurstfest is upon us!!! Here’s looking forward to beautiful weather, great sailing, delicious meals, fun musical entertainment, and cheerful camaraderie. What better way to get to know each other and enjoy our time with fellow sailors from our club and surrounding areas!

Once the hubbub of Wurstfest is over, let’s all enjoy a happy Thanksgiving.

Glen served in the USAF as Historian for the 55th Strategic Reconnaissance Wing and was rated the top Historian in the 15th AF during his final years in the service. After graduate school, Glen worked as a Relocation Coordinator for Merrill Lynch and as a staff real estate appraiser for J. Wyatt & Associates in Houston, Texas. In 1989 he founded Glen Graham & Associates Real Estate Appraisers, which conducted residential and commercial appraisals in the Houston and San Antonio/Austin markets. He was also an adjunct professor for Houston Community College throughout the 1990’s. He closed his business and retired at the end of 2020. Glen was a member of the National Association of Independent Fee Appraisers (now a part of the American Society of Appraisers) and served in local officer positions including Houston Chapter President and assistant State Director.
Glen and his wife Elsa learned to sail through the LCYC adult sailing classes. They have continued to learn a great deal over the years through participation in the club’s racing program. They also enjoy sailing just for the sheer joy of it and go out in their boat as often as possible. Since joining LCYC, Glen has enjoyed volunteering in the kitchen for many events, co-hosting breakfasts, helping on club work days, and serving on race committee and in chase boats. Glen has served on the LCYC Board of Directors and was the Personnel Chair in his final year.

Bill started sailing at Grapevine Sailing Club in 2006, where he met his wife Ann. At Grapevine, he raced a variety of keel boats as well as their Flying Scot. In 2009 Bill and Ann relocated from DFW to design and build their home near Canyon Lake. Currently they sail and occasionally race their Catalina 28 Girolata. Bill is an active LCYC volunteer with the Sail On program, Race Committee, Work Day, Adult Sailing, Adaptive Sailing and event co-hosting. Bill has been the Ditty Bag editor since 2017. Bill spent a 40-year engineering and business management career with Bausch & Lomb, Eastman Kodak and others. Post-retirement he taught at Palo Alto College, where he started the industrial instrumentation program. While not working on the boat, Bill enjoys travel, camping, hiking, design/build, natural landscaping and reading.

Laurie and her husband Chuck Begley joined LCYC in 1988. Laurie holds a master’s degree in Public Health. Before retiring in 2013, Laurie’s professional career involved high-level administration in a non-profit health care corporation. Laurie first sailed on Lake Pontchartrain as a teenager, enjoys cruising, and has occasionally crewed in LCYC races over the years on her father’s and husband’s boats. She has twice served as LCYC Secretary, has served as Wurstfest and Leukemia Cup meal coordinator, and helps with Wurstfest registration each year. Laurie has also managed the Leukemia Cup silent auction. Laurie has spent innumerable hours as chair of the LCYC Budget Committee for five years. She has participated in the SEW-MAD Regatta and has spent many hours behind the counter in the galley, most recently co-sponsoring the Commodore’s Breakfast.

Jordan’s fascination with sailing started at a young age when caught out in a gust in an Aquarius 23; Jordan was in the cabin clinging to the first washboard as he jumped up and down with joy, while his mother professed her belief that they would soon be coming to a watery end. Unfortunately, his sailing career took a long hiatus after that incident, as the demands on his father as an Air Force Officer did not gybe with sailboat ownership.

Jordan moved with his family around the country, to Europe, and finally settled in San Antonio. His global adventures continued as he was afforded opportunities to live in South Africa and Mexico through academic pursuits. Ultimately, he returned to San Antonio, where he has lived the bulk of his adult life. Through an introduction to the IT world, Jordan began his real career. He works for the San Antonio River Authority as the Database & Development Administrator. In this role he maintains the web systems, database servers, cloud infrastructure, several enterprise applications, and serves as one of the “old guys” in the agency who understands how everything is put together.

Jordan’s re-introduction to sailing came through sailing in the Hobie fleet at LCYC and attending periodic fleet planning dinners. After crewing on various boats, Jordan acquired a C&C 24 and then started racing an RS Aero. While it was hard for Jordan to volunteer for the race committee when he found himself on a boat for every race day, he has participated in other volunteer opportunities, including work days, helping with the new dinghy dock planning and design, working the race committee, acting as the scorer for the Race Committee, drafting NORs and sailing instructors, managing the Regatta Network events, and scoring every race. He has taken on the role of technical administration of the LCYC and Wurstfest Regatta websites and handles the technical needs of the site and consults on the content management and presentation.

Carlos Rosende became a governor on the LCYC Board of Governors in November 2021 to fill the unexpired term of resigning Board Member John Ruiz, who had accepted employment with the Club as the Property Supervisor. Carlos also served as a Club Officer (Secretary) from January 2021 through December 2021. Carlos has been nominated for a full two-year term as a Governor.

Carlos first sailed as a midshipman at the U.S. Naval Academy in 1973. Sailing took a hiatus after graduating from the Academy as Carlos went through medical school, internship and residency. Carlos resumed sailing after moving to Norfolk, Virginia, and introduced his wife Karen to the pastime. They have sailed in Hampton Roads, Chesapeake Bay, the Virgin Islands and on Canyon Lake. After retiring from the Navy in 1999 and relocating to San Antonio. Carlos joined the faculty of the University of Texas Long School of Medicine. Carlos served as a Professor of Ophthalmology, the Executive Vice Dean for Clinical Affairs and as the Chairman of the Department of Ophthalmology. He also served as the Executive Director of UT Health Physicians, the school’s 900-physician multi-specialty medical practice. In March of 2022 Carlos retired from the UT School of Medicine, ending his 40+ year medical career.

Carlos has been an active participant and volunteer in many LCYC activities since joining the Club in 2007. Although he is a “cruiser,” Carlos also enjoys crewing in LCYC races. In addition to his service on the LCYC BOG, Carlos has served on other boards, including the Board of Directors of the Bexar County Medical Society, the Board of University Physicians Group, the Board of Regional Physicians Network, and the Board of Directors of the Medical Services Research and Development Plan. He has held leadership positions in the Association of Academic Medical Group Leaders and in the Group for Faculty Practice of the American Association of Medical Colleges.

Terry is a long time sailor and LCYC club member. He is married to Gail Garrett. He has been sailing since grade school on Lake Michigan and other inland lakes and raced with his brother on a National One Design Sloop. Terry has taught his 3 sons to sail and race, passing on his own and his father’s love of racing.

Terry is a graduate of Truman University in Missouri with a Business Administration degree. He previously worked for the Boy Scouts of America as a District Scout Executive. He has been a merchant and an Innkeeper throughout his career. He retired after 23 years with Drury Inn Hotels as a General Manager, including training numerous general managers in property management and cost controls.

Terry’s LCYC activities include hosting club social events, including Shrimp Boil, Steak Nights, the Jimmy Buffett parties and over 17 Wurstfest Regattas, heading up the breakfast Galley crew. Terry serves on the club’s Long Range Planning committee, served on the Board of Governors in 2013-14 and continues to work on Spring & Fall work weekends. Terry received the Club’s Lifetime Service Award in 2020.

Now a part time cruiser with a Catalina 25, Terry has sailed numerous boats including Windmills, NOD, Hobie 16, Hobie 18 as well as bare boating in the British Virgin Islands. Gail and Terry follow son and grandson, John  & Dylan on the racing circuit throughout the USA.

The Officers and Board of Governors appreciates the service of the 2022 Nominations Committee, including Chairperson Jim Kizziar, Elizabeth Bentzen, Sandra Lindsey, Chris Powers, and Commodore Bill Clark. Vice Commodore Anu Day served as a non-voting participant in Committee meetings.

by John Ruiz and Pete Prados, Docks and Grounds 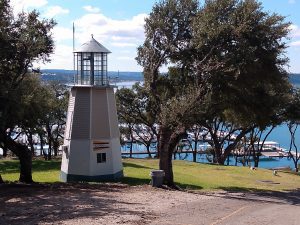 Did you know that the LCYC Lighthouse is one of 8,260 lighthouses listed in the Database of International Lighthouses? While not as well known as the Cape Hatteras Light, it has a storied history guiding LCYC ships safely past treacherous “Leubner Point” since 1986. Originally located at a San Antonio seafood restaurant, the lighthouse was moved by flatbed truck to LCYC in 1985. A complete history of the lighthouse can be found in Lake Canyon Yacht Club – The First 50 Years by Kathy Leubner. 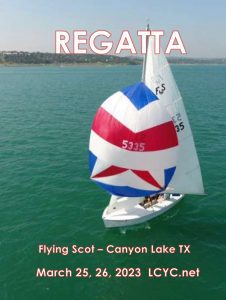 Watch for the Wurstfest racing report next month.

Chips, salsa and beer were served after race days on October 15 & 16th for the Fall Racing Series and also for the Long Distance Race on October 2nd.

A BIG Thank you to Paul & Gwen Cunningham for the October 9th Commodore Breakfast! Made to order omelets, sausage, fruit, coffee and juice were served to members.
Commodore’s Breakfast on December 11th will be hosted by the Outgoing Board.

The Merrie Old Christmas Party has been moved to the evening of December 3rd following the Annual meeting. Watch the Blast for more information. 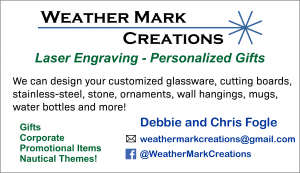 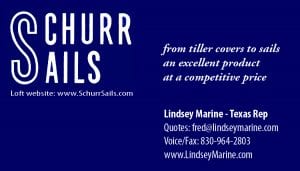 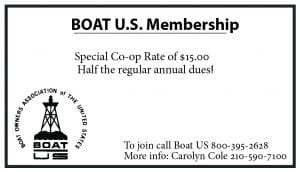 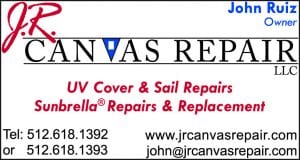 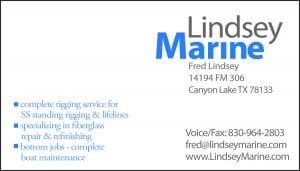 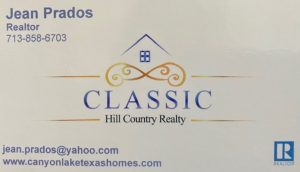 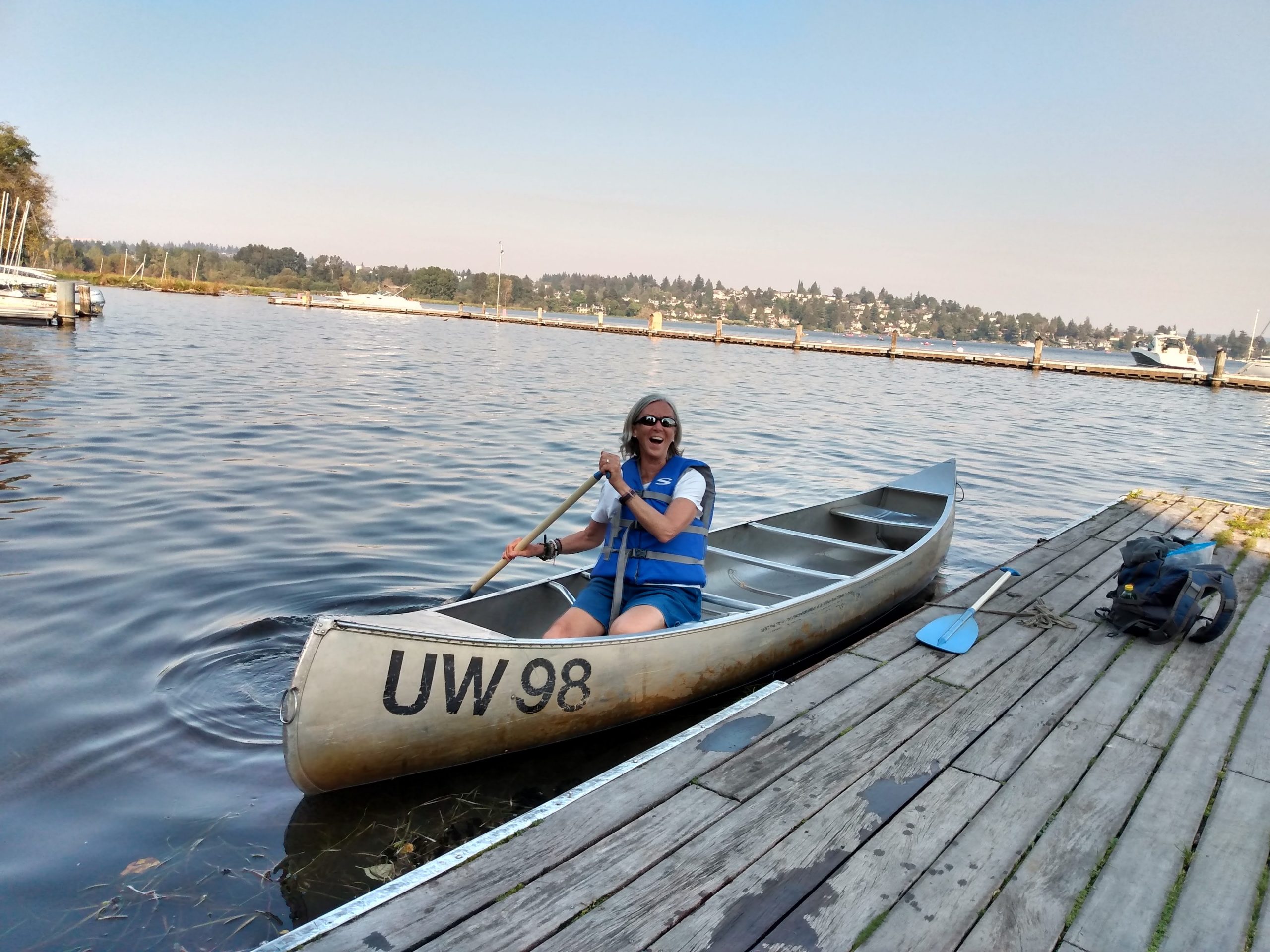